It’s a long-term goal I have to cultivate my own spin on Margaret Lanterman’s look. My husband got my first signature piece- the wooden leaf and acorn brooch. This is actual vintage from the nineties (I am crying about how old that just made me feel!!!). The only ones I can find are on Etsy and Ebay. I wore it with my squirrel/mushroom dress from ModCloth which I can’t believe doesn’t also have acorns on it. Also… I guess it’s fall now. The fall is not what it seems here in sunny SoCal. 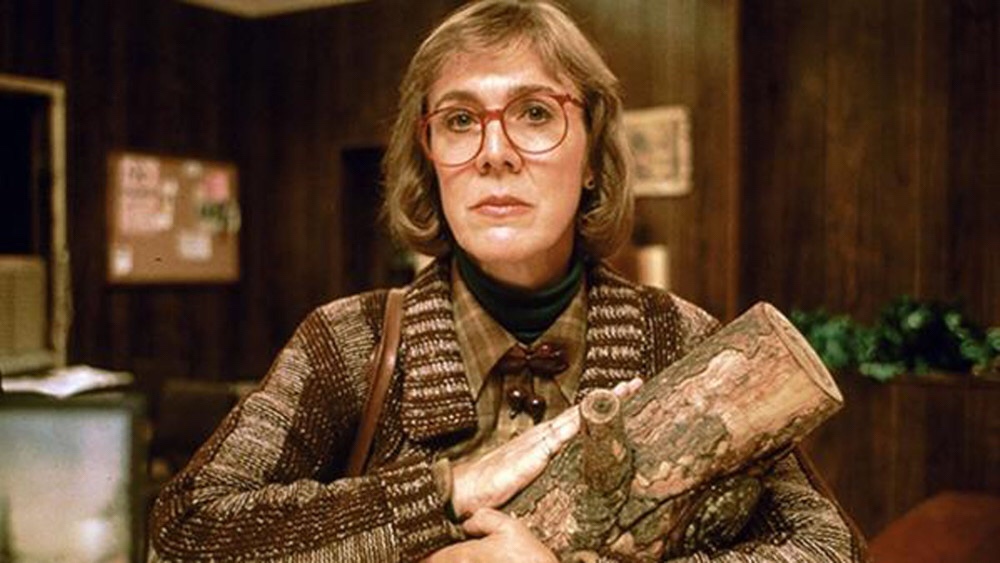 ***picture from Variety who credits ABC

I got new glasses and I legit tried to find some red-rimmed ones but no luck. Warby Parker doesn’t have any either… Does anyone know of any other online glasses retailers that they trust? I like these but I’m kinda afraid of “ezcontacts.com” Oh well, I’ll just take my time. The fish aren’t running.

This is not a speech blog, but I am a speech therapist. One of the many things that falls under my scope of practice is “pragmatics” or the functional and social use of language. I very often have to explicitly teach students “hidden social rules” or expected behaviors that most of us seem to learn without trying (like personal space, staying on topic, waiting your turn to talk, facing the person you’re listening to, etc). I usually start with a discussion about which way you face in an elevator. Did anyone ever tell you that, when you walk into an elevator, you’re supposed to turn around and face the door? Of course not- but how do you know to do it? It’s a “hidden” rule.

So I freaked out when Dougie got into an elevator for the first time during season 3 of Twin Peaks, facing the wrong way (and breaking some other social rules too). And then some genius edited 2 elevator scenes together for me and posted it on YouTube. They do say “damn” so I only play this for high schoolers- and even then, I either talk over that part or pause and skip over it. But it’s so much more effective than just talking about an elevator. And I get to watch Twin Peaks for work!

I’m always on the lookout for appropriate-for-school YouTube clips that involve people breaking social rules or using obvious non-verbal communication. I do a whole Elf unit around Christmas time. (The Dabbling Speechie has a blog post with links to several clips all in one place plus sample activities!) So finding a Twin Peaks clip to add to my collection was awesome.

America’s Test Kitchen gets it right in their “Slow-Cooker Revolution” book. Avoid putting chicken in a slow-cooker- but if you have to, cook it on low for no more than 4 hours. Chicken breast cooks in an oven between 25-40 minutes so what are you even doing? When I first got a slow-cooker eighty billion years ago (ok maybe 12 years ago…), I think there was a misunderstanding that you couldn’t cook anything on low for less than 6 hours. If you were cooking for only 4 hours, it had to be on high, no matter what. There were other misunderstandings like pasta and rice could be thrown in with the rest of the ingredients and not turn into chicken pudding for dinner time.** Or that vegetables would maintain their color after cooking for hours in brown liquid. Or that anything “slow-cooked” would have a delicious melt-in-your-mouth quality. Or that slow-cookers are for busy people (and require little to no prep/planning).

Anyway- I found a yellow curry chicken recipe for this weekend and I was happy to see it recommending 4-5 hours of cooking on low. But it also recommended putting in bell peppers and letting them cook that whole time. I knew a little better and put them in for the last hour. That’s also too long… they totally disintegrated.

I still ended up with an Instagram-worthyish bowl… but look at those sad pepper bits… poor things.

The only vegetables that belong in a slow-cooker are anything you’d leave on a stove forever in a soup- onions, carrots, celery, potatoes. Anything else is lies (including already-cooked canned beans in chili- that is wrong!!!) Unless you stick it in for the last 15-30 minutes or so- but you’re using a slow-cooker bc you’re out doing important things so who has time for that?

Anyway- there are as many crappy slow-cooker recipes on the internet as there are cat videos. I feel the need to put it out there- slow-cookers can turn the crunchiest carrots into almost-purée so think twice before putting anything less hardy in that pot. Even if your recipe says so.

Also, btw- this is not a food blog.

**I’m going to break my own rule just for history and palate purposes- here’s an actual recipe from a book we used 12 years ago: 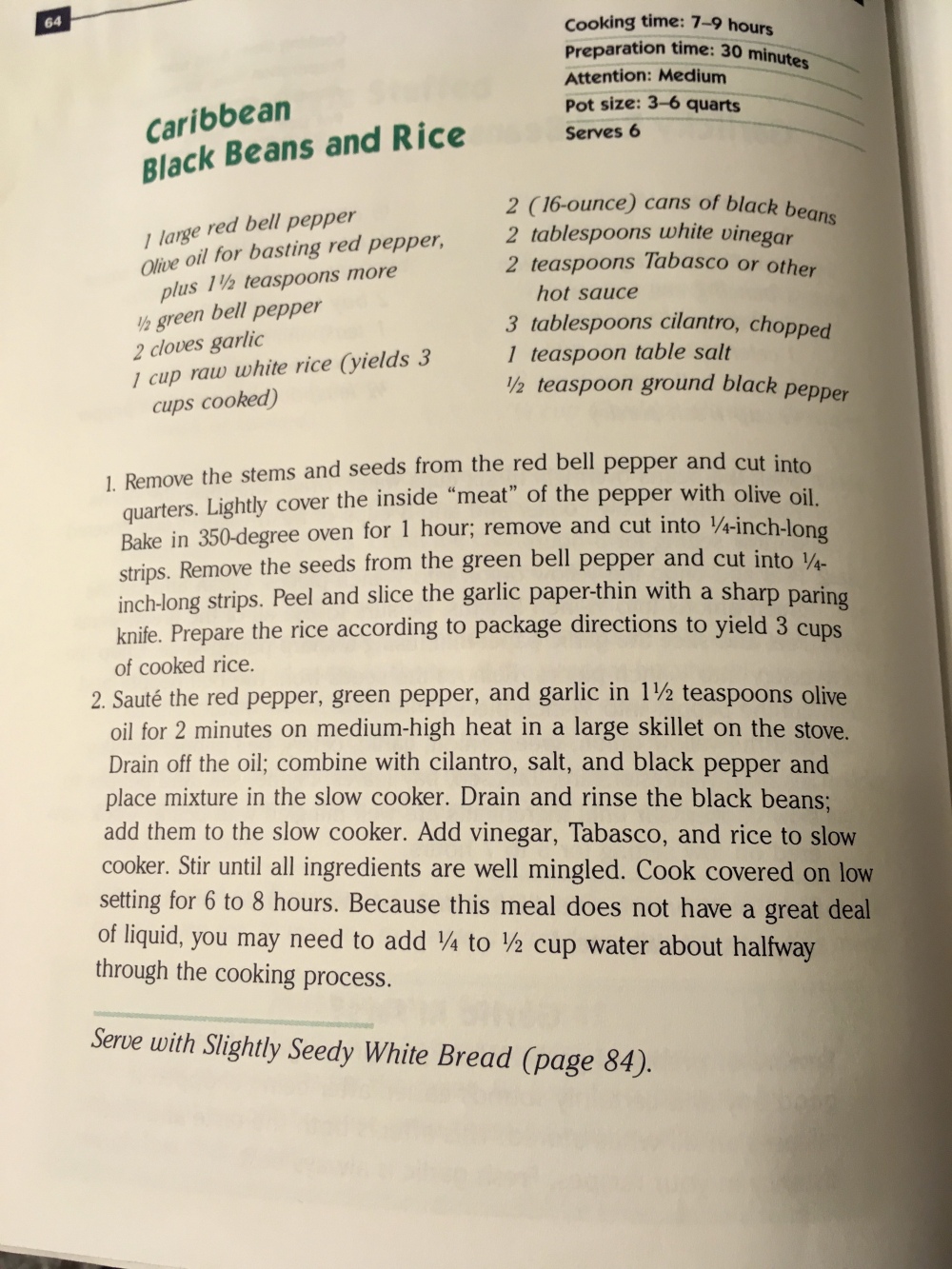 Put COOKED RICE in your slow cooker for 6-8 HOURS???!!!! With bell peppers and canned beans…. What is wrong with you?

Here’s the book that you don’t need to buy unless you need kindling:

Make this and love it:

Italian Vegetable Soup from Barefeet in the Kitchen. The link goes to a recipe that doubles the recipe in the fabulous “Weeknight Dinner Cookbook” (buy it now omg you need it if you eat food). I made it tonight with half ground beef and half Italian sausage. We ate it with crusty bread and red wine…. I also added wine to the soup…. I’m freezing half and we’ll eat it again in a few weeks. I like to think I make dinner for myself weeks in advance… OMG SO good. It’s like spaghetti sauce and veggies. Only better than that sounds. It’s awesome and also a freezer meal you actually want to eat. Great for bringing to new moms (who aren’t vegan). I say that mainly bc I would love someone to make this for me (for any reason really- I’m a mom to a four year old- does that count? It should. We should all make each other soup.).

And while I’m here- I refuse to stage my recipe pictures bc it sets up unrealistic expectations. Nobody lives in natural lighting and perfectly clean countertops 24/7. And this isn’t a food blog. And it’s my blog so I can do whatever I want!!

Also- I refuse to type up or copy/paste other people’s recipes onto my blog. Did you know that you can’t copyright a recipe? So people who write recipes are just super vulnerable to all kinds of other people copying their work and claiming it’s theirs! I will only post a recipe if its author has posted it on his or her own website already and I can link to it. Because to do otherwise is douchey. Stay classy, ppl.